This is an extremely rare fossil dinosaur tail.  The 15 foot long tail is mounted with a wavy curve to mimic the way the tail would move behind a walking dinosaur.  Camarasaurus Grandis reached lengths of 42-45 feet long.  This is an amazing one of a kind fossil.

Camarasaurus was a genus of quadrupedal, herbivorous dinosaurs. It was the most common of the giant sauropods to be found in North America. Its fossil remains have been found in the Morrison Formation of Colorado and Utah, dating to the late Jurassic Period (late Oxfordian to Tithonian stages), between 155 and 145 million years ago.

The name means “chambered lizard”, referring to the hollow chambers in its vertebrae.

Camarasaurus is among the most common and frequently well-preserved sauropod dinosaurs. The maximum size of the most common species was about 15 meters (50 ft) in length. The largest species  reached a maximum length of 23 meters (75 ft) and maximum estimated weight of 47 tons.

The arched skull of Camarasaurus was remarkably square and the blunt snout. The 19 centimeter long (7.5 in) teeth were shaped like chisels and arranged evenly along the jaw. The strength of the teeth indicates that Camarasaurus probably ate coarser plant material than the slender-toothed diplodocids.

Each front limb bore five toes, with the inner toe having a large sharpened claw. Like most sauropods, the front limbs were shorter than the hind legs, but the high position of the shoulders meant there was little slope in the back.

Serving the purpose of weight-saving, as seen in other sauropods, many of the vertebrae were hollowed out with passages and cavities for an intricate system of air sacs connected to the lungs. The neck and counterbalancing tail were shorter than usual for a sauropod of this size. Camarasaurus, again like certain other sauropods, had an enlargement of the spinal cord near the hips. 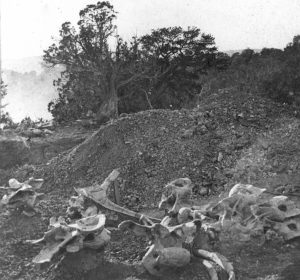 It was not until 1925 that a complete skeleton of Camarasaurus was recovered, by Charles W. Gilmore. However, it was the skeleton from a young Camarasaurus, which is why so many illustrations of the dinosaur from the time show it to be much smaller than it is now known to be.