All ammonites possessed an external shell, which is divided internally into chambers filled with gas giving it buoyancy during the life of the animal. This beautiful Cleoniceras Cleon measures approximately 3×3 inches in diameter. This particular ammonite has some pyrite replacement within the chamber.

Ammonites from Madagascar are the most famous of fossils. The name Ammonite comes from the Greek ram-horned God called Ammon. These cephalopods first appeared in the seas 415 million years ago. Their stunning appearance is due to the mineral aragonite that occurred during fossilization. Ammonites are a perfect addition and an essential part of anyone’s fossil collection as well as any home decor. With these ammonites, the beauty is within but if they are found in clay then their outer shell will have a beautiful mother of pearl luster. 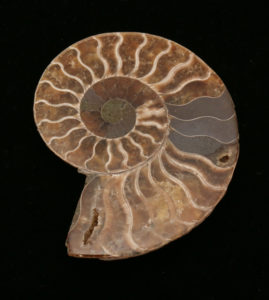 Ammonites belong to the Mollusca phylum. This class is known as cephalopods, “head-footed” creatures such as octopus and squid. They swam in ancient oceans from the Devonian Period, about 400 million years ago, to their extinction along with the dinosaurs in the Cretaceous Period, 65 million years ago.

250 million years ago, during the Permian period, only 10% survived. Ammonites went on to flourish throughout the Triassic period. At the end of this period, 206 million years ago, all but one species died. These creatures thrived from the Jurassic until the end of the Cretaceous period when all species of ammonites became extinct.

Ammonites were free-floating invertebrates that were attacked by plesiosaurs and mosasaurs, two groups of gigantic marine reptiles. One way that ammonites could avoid an attack was to quickly change their buoyancy levels, zig-zagging and sinking rapidly. Their original form was of a straight-shelled creature known as Baculites.

Ammonites began life very tiny, less than 1mm in diameter. They were vulnerable to attack from predators. They fed on plankton and quickly assumed a strong protective outer shell. They also grew quickly with the females growing up to 400% larger than the males because they needed the larger shell for egg production. Most ammonites only lived for two years. Some lived longer becoming very large.

Where are ammonites found?

Ammonite fossils are found on every continent and come in nearly every naturally occurring color. Because of their rapid evolution and widespread distribution, they are an excellent tool for indexing and dating rocks.

Little of their way of life is known but it’s thought that they possibly lived in open water and were not bottom dwellers as their fossils were found laid down in rocks.